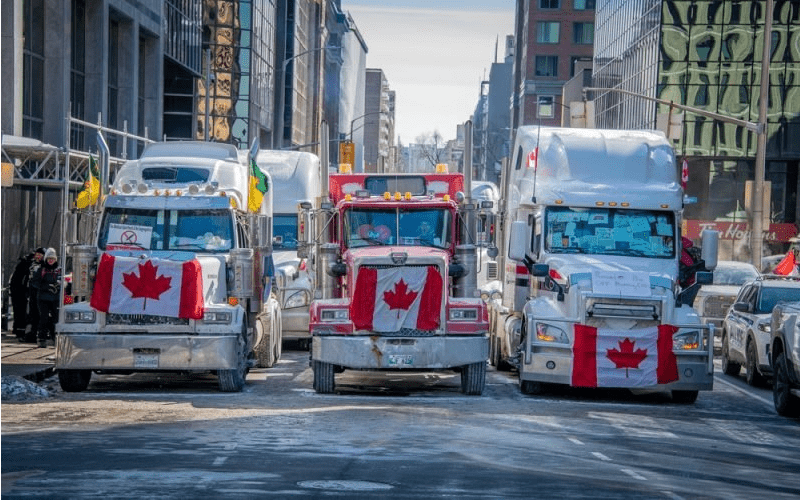 Oh Cana-duh!? Justin Trudeau has proven through c.o.v.ID that he is a Communist leaning Globalist and has actually come out and admitted it.

“There is a level of admiration I actually have for China because their basic dictatorship is allowing them to actually turn their economy around on a dime and say we need to go green, we need to start, you know, investing in solar.” Justin Trudeau told the group of women. “There is a flexibility that I know Prime Minister Stephen Harper must dream about having a dictator ship where you can do whatever you wanted that I find quite interesting.” Justin Trudeau

UnvaXXXinated Canadians have been fired from their jobs, shunned, and publicly ridiculed by the Prime Minister. Worse yet, forbidden from shopping in grocery stores in Quebec, and even big box stores, nationwide. Furthermore, he froze bank accounts of hard-working Canadian truckers, who protested the vaccine mandates and the vaccine passports, which went against every fiber of being a true Canadian. This is truly disgraceful. Then to add fuel to the fire, Trudeau compared the Canadian heroes that protested to “neo-Nazis and right-wing extremist Trump supporters”. He also lied and claimed the Freedom Convoy was violent – which has since been proven grossly false. Who does this arrogant communist think he is? He sounds like Fidel Castro. The Canadian treatment at the border was also nothing short of abusive, with actual Nazi tactics! With “Vaccine paperz”, travel mandates, a tax for the unvaccinated in Quebec, etc., time and again Trudeau has proven to be a part of the Deep State Cabal.

Either way, Justin Trudeau “admires communist dictatorships”, and his actions prove it…

Justin Trudeau said he admired China’s dictatorship. Canadians should have believed him – The Maine Wire

Freedom of expression and media freedom

“Bill C-10 was hotly contested, with concerns regarding its implications on free speech for social media users, and the expanded authority it would provide the Canadian Radio-television and Telecommunications Commission (the CRTC) to regulate the algorithms that determine what users see on their feeds.”

“In a bid to persuade COVID-19 vaccine holdouts to get the jab, Quebec Premier François Legault announced last week the government is expanding the vaccine mandate to include large-surface retail stores that don’t sell primarily groceries, including Costco, Canadian Tire and Wal-Mart.

The premier said big-box stores were targeted because they are well-staffed and better equipped to check vaccine passports.

“There are more than 25,000 people missing from the retail sector in Quebec. That’s a lot of people,” he said. Having to deal with angry unvaccinated shoppers is another concern, said Côté.”

“For large retail stores such as Walmart or IKEA, shoppers without a vaccine passport “must be accompanied at all times by a store employee,” according to Quebec’s health ministry. This applies to everyone 13 and older and all commercial businesses that are 1,500 square meters (16,146 square feet) or larger. Unvaccinated customers can only access pharmacy services in the larger stores and aren’t allowed to buy any other products when accompanied by an employee, the ministry says.”

“President of Bayer’s Pharmaceuticals Sector and member of the board said in his speech: ‘Ultimately the mRNA vaccines are an example for that cell and gene therapy. I always like to say: If we had surveyed two years ago in the public: ‘would you be willing to take a gene or cell therapy and inject it into your body?’ we probably would have had a 95% refusal rate”

Canada Will Require Using a Vaccine Passport for Entry