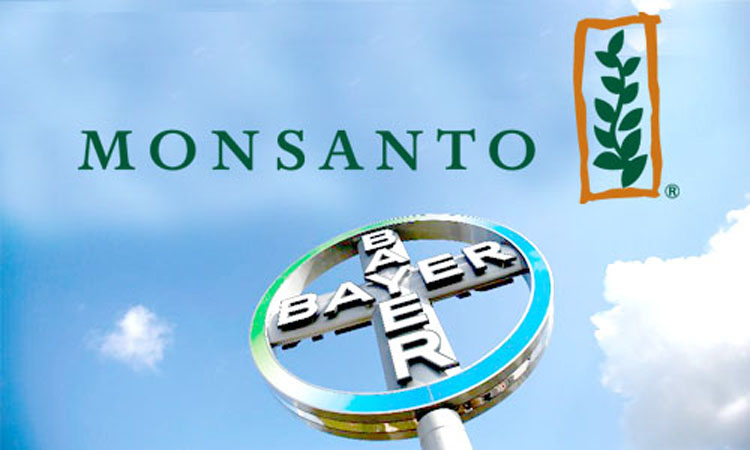 MonSatan creates GMO’s (Genetically Modified Organisms) and owns Roundup, a pesticide so deadly that it was killing their corn crops, among others! So rather than taking the poison out of the pesticide, they decided to add a toxin to the corn… Creating a “like magnet” effect, repelling each other! A Genetically Modified Organism. Pig feces was used in the corn toxin. The two toxins would repel each other, therefore not killing the corn but ultimately killing us! Monsanto is MonSatan! If that wasn’t bad enough, Monsanto also makes bovine growth hormone (rBGH), which yields more for the farmer through steroids, while feeding us cancer! Cancer that Monsanto has perfected back with Agent Orange in Vietnam, and Aspartame that Donald Rumsfeld pushed through the FDA!
Consumers of Bayer should ask themselves why they remain a customer with a corporation that just partnered up with the Cancer-causing juggernaut. Then asking if you can still trust them knowing they are one in the same. Bayer, the Parent Company was caught selling AIDS tainted pills to Africa! They decided to make a little money and killing hundreds of thousands…instead of destroying them and losing millions of dollars.

Methods: To address this question, RI subjected all HLTs from aspartame-exposed animals to immunohistochemical analysis using a battery of markers and to morphological reassessment using the most recent Internationally Harmonized Nomenclature and Diagnostic (INHAND) criteria.

Findings: This immunohistochemical and morphological re-evaluation confirmed the original diagnoses of malignancy in 92.3% of cases. Six lesions originally diagnosed as lymphoma (8% of all HLTs) were reclassified: 3 to lymphoid hyperplasia, and 3 to chronic inflammation with fibrosis.

The Victims of Agent Orange the U.S. Has Never Acknowledged

Read the full letter to Jess Rowland (the “Monsanto mole” inside the EPA) from Marion Copley (now deceased, former EPA scientist) to get the full picture.

Since I left the Agency with cancer, I have studied the tumor process extensively and I have some mechanism comments which may be very valuable to CARC based on my decades of pathology experience. I’ll pick one chemical to demonstrate my points.

Glyphosate was originally designed as a chelating agent and 1 strongly believe that is the identical process involved in its tumor formation, which is highly supported by the literature.

-Chelators inhibit apoptosis, the process by which our bodies kill tumor cells

-Chelators often damage the kidneys or pancreas, as glyphosate does, a mechanism to tumor formation

Jess, you and I have argued many times on CARC. You often argued about topics outside of your knowledge, which is unethical. Your trivial MS degree from 1971 Nebraska is far outdated, thus CARC science is 10 years behind the literature in mechanisms. For once in your life, listen to me and don’t play your political conniving games with the science to favor the registrants. For once do the right thing and don’t make decisions based on how it affects your bonus. You and Anna Lowit intimidated staff on CARC and changed MI ARC and IIASPOC final reports to favor industry. Chelators clearly disrupt calcium signaling, a key signaling pathway in all cellos and mediates tumor progression. Greg Ackerman is supposed to be our expert on mechanisms, but he never mentioned any of these concepts at CARC and when I tried to discuss it with him he put me off. Is Greg playing your political games as well, incompetent or does he have some conflict of interest of some kind? Your Nebraska colleague took industry funding, he clearly has a conflict of interest. Just promise me not to ever let Anna on the CARC committee, her decisions don’t make rational sense. If anyone in OPP is taking bribes, it is her.

I have cancer and I don’t want these serious issues in MED to go unaddressed before I go to my grave. I have done my duty.

“Just last year, the International Agency for Research on Cancer (IARC) , a branch of the World Health Organization, identified this herbicide as “probably carcinogenic.” based on epidemiological studies, animal studies, and in vitro studies.