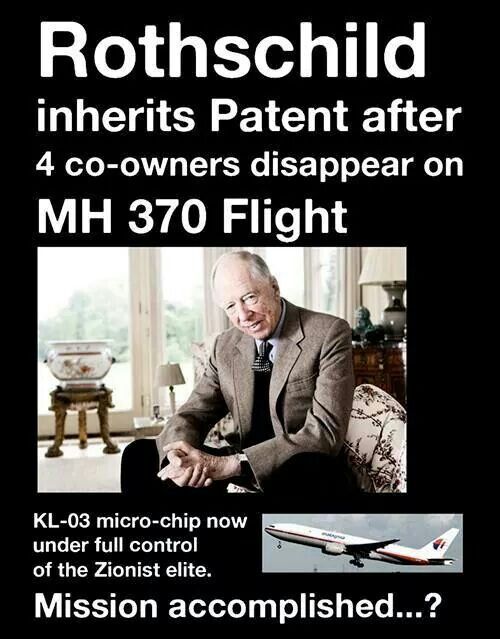 Flight 370 and the Rothschilds connection is not surprising. A Freescale semiconductor patent reverted to Rothschild possession with this “crash”, and timely death of four of the Patent holders.

“Four days after the flight MH370 disappear, semiconductor patent US 8671381 (System for Optimizing Number of Dies Produced on a Wafer) was approved by the U.S. patent office … As all four Chinese members of the Patent were passengers on the missing plane. … “If the patent holder dies, the other owners share equally in dividends from the deceased”. … Who owns Freescale Semiconductor? The answer is: Jacob Rothschild.”

Eerily similar to how the sinking of the Titanic helped usher in the Federal Reserve Central Banking System, after losing a few key Patriots who opposed the Federal Reserve! John Jacob Astor, Benjamin Guggenheim, and Isador Strauss!!!

Phillip Wood was a passenger on Flight 370 and he sent with this picture a message explaining how he had the camera, was drugged and separated from the other passengers. He was able to heroically send the picture from his location. Although this picture shows nothing, it’s data reveals all!